B122 - Activation and Issue: Picking on people in a “jokey” manner

’06 Nov 30 Activation and Issue: Picking on people in a “jokey” manner
A couple of days ago the manager said something to the effect that if I did something to tic her off today that she would kick my ass. I didn’t respond in the moment as were both busy and going in opposite directions. Later I confronted her and asked her what she meant and she said that she was only joking with me and that she didn’t mean anything buy it. That’s an issue I have where either people are serious but say that what they said was only a joke, or they like me, and the only way they can show affection is either in an insulting or jokey manner. In this men and women are equal players.

The same woman that told me earlier to ask for food donations, asked me again for a Toy donation. But this time she didn’t ask me directly, she made it more into a statement where she said, “You’re still not asking people to give to the Salvation Army”. I challenged her but she denied and back tracked saying that she wasn’t asking or telling me that I should, only observing that I wasn’t. I knew what she had said and what she had meant and I asked her that if that wasn’t her intent and she already knew the answer, then why did she make the comment. She didn’t respond but turned to serve a customer. The next time she brings it up I will tell her what to do with herself, 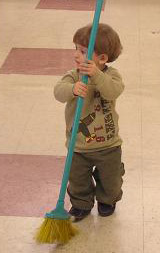 4b ’06 Nov 29 4:42 am Activation and issue: having to pick up after others.
I have an issue and judgments with customers changing their minds and either dropping products they pick up in various bins thought-out the store or coming up to cash and then sorting out the items they want from the ones they don’t and then I or another cashier having to go and return them to their right place. It’s bringing up my childhood and me having to pick up after my siblings or my mother and of my mother changing her mind and saying to do it this way one time and then the next time her wanting it another way and I’m supposed to know what she wants this time. Or her saying that she wanted to do this, but then changing her mind and denying that she said the first comment.

I also have disappointment in that others don’t do what they say they are going to do. I also have judgment on me not to be that way. Not to change my mind, be a slob, not to make people have to pick up after me. Not to be like my mother.

This also ties into customers shopping and waiting until the store is closing or dilly dallying, fiddling with their purse or change, making me and others deliberately “wait” on them. They don’t seem to care, they take their sweet time, yet they are the pushy ones trying to get their stuff on the counter before the other person has finished… Hummm. Come to think of it, most of the women in my life have been that way. I’d be ready and woiuld have to wait on them and then rush to get there on time, ie the movies. Yet if I did that, there would be hell to pay.

OK, so what are the issues? How do I heal them, Hummm. Is this is also a reflection of how I am on myself? My book, am I procrastinating, of course I am. Am I pushing the envelope waiting until the doors are almost closed before I finally decide what I want?

Hummm, I can see how I also do that with other experiences; wait for other people to take the lead. Like with women. Now I’m basically waiting for them to approach me. I check them out and then let them decide if they want to peruse any sort of a relationship as I hold back. When I feel accepted and desired, then I move but otherwise its stop and go, not so much stop as just idling. So where is all this going? I don’t know.