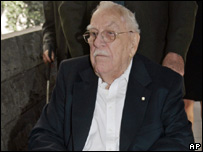 US car-deaths man given probation An 89-year-old American man whose car crashed into a farmers' market and killed 10 people has been sentenced to five years' probation for manslaughter.

The judge in Los Angeles said George Weller deserved time in jail but was too frail to survive behind bars..... Weller said he mistakenly pressed the accelerator instead of the brake when he drove into food stalls in Santa Monica in July 2003.

Weller was not in court to hear Judge Michael Johnson condemn his "stubborn and bull-headed refusal to accept responsibility"..... The judge said Weller had made "unbelievably callous statements" such as "just think how I felt" at the time of the crash..... "I'm convinced that Mr Weller deserves to go to prison," the judge said, but added that it "would not do anybody any good"

Weller was found guilty of vehicular manslaughter with gross negligence on the ninth day of jury deliberations..... He was excused attendance from the three-week trial for health reasons.

Witnesses said Weller was "seemingly nonplussed" moments after the accident..... Prosecutor Ann Ambrose said earlier in the trial: "He looked at what he had done, essentially shrugged his shoulders and said, 'Oops.'"

Trial ordered in deadly hit-and-run case SAN FRANCISCO - An SUV driver accused of running down 19 people in a deadly spree through streets and sidewalks was found competent to stand trial after his medication was changed..... Police arrested Omeed Aziz Popal on Aug. 29 after surrounding his sport utility vehicle with squad cars. By then, victims had been hit at more than a dozen locations in Fremont and San Francisco, and a 54-year-old man had been killed in Fremont, where Popal lives.

Popal, 29, was found competent Wednesday to stand trial in San Francisco on 18 counts of attempted murder and assault with a deadly weapon, plus single counts of battery on a peace officer and reckless evasion from police. He is suspected of murder in Fremont.