Today I got called into the office and was talked to about my dealings with a customer. When I spoke with the manager, I explained myself and defended my position. What had happened was that woman with the baby had taken her items out of her cart while I was waiting on a customer and had put them on the next empty counter to me. That she then took the baby out of the cart and moved the cart away and then came to my counter. I now had to walk over to the counter beside me, pick up the products, walk back to my register, pack it and enter it in the register and then repeat the process several times as she had 20 – 30 items. At the same time she was also saying that she didn’t want this or that item that I had already placed in the bag and entered as a sale. Added to that, there was a line up and I felt pressured to get her out of the line and out of the store. 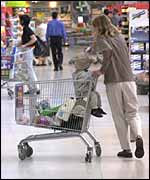 I originally commented on her about placing the order on the other counter and she said that she thought that was my counter and that she was just saving time. I said that if that was “my” counter, then I would have been serving the other customers from there and it wouldn’t have been empty. She didn't like that and took offence. I was also frustrated with her changing her mind on her purchases after the fact. She asked if the manager was in and I replied twice that she was and asked her if she wanted to talk to her and both times she said no, but later she phoned the store and commented on my behavior.

Later I reflected on the experience and I realized that I was angry at myself for denying expressing myself with a couple of previous customers that had put their merchandise on the empty counter and that I had to retrieve, but said nothing. I realized that I took out my denied anger on a woman with a baby who happened to had also put her merchandise on the empty counter. Although there was an issue with the woman, she was not the cause of my denied anger.

Now I was faced with having to either deny expressing that I was wrong and had treated the woman unloving, or express the truth of what really happened and not defend and justify my actions. On my break, I went back to the office and apologized, stating that I was wrong to take my anger out on the woman as I had denied expressing myself with the other customers. While I felt that this part of the experience/lesson was over, I also felt there was more.

Tonight I was trying to feel what else I was missing and what I got was that I needed to realize and admit that I was wrong and that that was part of false pride and admitting my mistakes. I was also thinking of how some people are so asleep and then there are others who don’t give a shit. There were at least four occasions where I had to warn my customer not to turn and walk away as a person had just pushed a shopping cart behind them, literally inches from their body. Then there were also a couple of customers that took it upon themselves to not only move the carts, but to also organize them. But the majority just pushed their carts in the general direction of where they were supposed to be parked as they walked out the door, or they would just leave their cart where it was and make their way out of the store.

I’m thinking that I have judgments on these people and that I have to let them be what they are, but the question is how do I do that without being in denial? I guess that if I felt they were somehow attacking me personally then I need to express that. If they are simply reflecting my judgments, than I need to be aware of them and then let them go by allowing them to be and do what my judgments say they are doing and see where that leads.

Ahhhhh! I’m still trying to protect. I’m trying to protect the other customers and what they are thinking; that they are also being inconvenienced by whatever this customer is or is not doing. These are also times when I’m picking up on other people’s feelings and judgments and I’m re-acting to them thinking they are mine. I have to also let these other customers deal with their issues and not try to make the situation better for them.

People are also confused and part of my issues is still trying to lift them out of their confusion. Others are deliberately trying to confuse me and that also bugs me as I can feel them pulling on me trying to distract me. What I need to do here is to ask questions like. What is your intent? What do you want? What are you trying to get me to do?