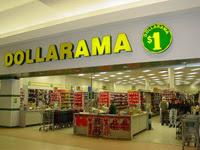 Dollarama, not what it appears to be
I notice today that my throat is getting sore and now I’m having difficulty in swallowing (not expressing myself) and that both of my kidneys are also sore as is my lower back. I feel that I’ve been mentally driving my body these past few weeks, not taking a break when I’m tired, and only getting one break in a full day, besides a half hour for lunch. I’ve been forcing myself to do what the company wants and that is to keep the customers happy by cashing them out with their goodies and taking their money as quickly as possible.

I did some searching on the internet these past few days and it turns out that Dollarama, the company that I’m presently working for, was started by a Canadian, Mr. Rossy in 1992 who developed it into a successful family run operation with several hundred stores. In 2004, he sold an 80% share to Bain Capital, a USA venture capital corporation, for $1.03 Billion dollars. It turns out that the Bain Corp owns also has interest in 230 companies around the world and is worth billions of dollars. Dollarama made $750 million in sales last year from some 400 stores. They are planning to open another 50 stores this fiscal year. Dollarama has 40% of the dollar store market share and is growing every year. More than 50% of the company products come from China and the rest are from third world companies or from leveraged sales or private labels. The average store size is approximately 9000 sq. feet. It costs just over $500,000.00 to equip and stock a store and the return on investment is 14 months… If that’s not making money…. nothing is.

This is now a “Global Company,” part of the global conspiracy to manipulate and eventually control the retail markets in every sector that affects the public. From Dollarama to Staples, to Dunkin Donuts to clothes, finance, music, entertainment and even sports and their recent attempt to purchase the entire NHL (National Hockey League) franchise… Anything that the consumer needs in the way of food, shelter, clothing and even entertainment is what they’re gobbling up. Buying out and taking over successful companies with the intent to eventually cut off any free enterprise so that eventually, only the BIG boys will be left to control the masses.

I was totally fooled by Dollarama’s humble and modest appearance and manner of business with a “cash only” policy and with no product priced over $1.00 with some being sold for less. I knew they had a few stores but didn’t know that there are over 400 stores, employing thousands of hourly paid minimum wage employees, forced to work floating hours and shifts. If they are lucky enough to be considered regular staff, they are guaranteed 25 hours a week. The shifts and breaks are so scheduled that an employee gets only one 15 minute break in a nine hour day. Employees are also expected to arrive 10 minutes early and to leave 10 minutes late without compensation. There is also no employee medical, dental or insurance coverage. On the other end of the scale, several of the company officers are pulling in six figure salaries and bonuses.

The Bain Company and its shareholders and those at the top of the “food chain” are making money off of both the cheap labour in foreign countries and also by paying minimum wages and benefits to employees in this country. The only people that are benefiting are those at the top of Company “food chain” and the consumers, who for now are getting a good deal for their buck, and are flocking in to save money. While they are saving money in the short term, in the long run they will lose out when all of Dollarama competitors have been forced out of business and prices begin to go up as in the case of Wall-Mart.

I’m including a few links to sites that I’ve found. Oddly enough, or not so, there is an “official Dollarama” website, but it’s not functioning per say.

Dollarama and dollar stores in Canada

Someone forced them at gunpoint to work at Dollarama? All of Dollarama's employees have the option of trying to find employment elsewhere. Of course if they really have ambition, they could take the risk of starting their own business. Of course that might involve making a profit, and you have a problem with people making a profit on their investment, so you'd probably fail as an entrepreneur.
Bain risked over a billion dollars buying Dollarama. In light of that level of investment, six figure salaries for the folks running the company are reasonable.

Thanks for you comments and your point of view. It's a good example of the mentality of the "other" side and those that agree with it...

If you are looking for agreement with your point of view, you have posted to the wrong blog. You would have better luck posting your comments to those that you are supporting and defending.... If you are looking to debate this topic, you have also made another error in judgement.

Just because Bain took a risk doesn't justify the way Dollarama employees are treated. Most people hate their jobs and do seek other employment but not everyone is so lucky. The point is, no matter where you work your employer should treat you with respect. Also, if someone is working at Dollarama then most likely they don't have the financial means to start their own business. Get your head out of your ass.

I published your comment just to let folks see your ignorant judgments and cold heartlessness… Unfortunately, your mentality is par for the course for most business morals.. and in your case.. Wannabe mogul… I say wannabe, as any self-made entrepreneur would not be wasting their time reading and commenting on blogs..