B136 - Women no different than Men 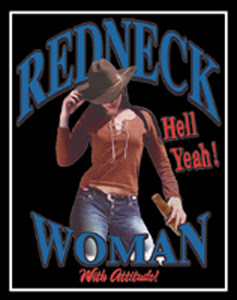 It’s interesting to see how women in a group are really no different than men in a similar setting. Women have a different form and way of expressing themselves but underneath the so-called feminine mystique lies the same what I call red neck mentality.

Red neck women may say they are looking for love but what they are really looking for is a man to get laid and to take care of them and to treat them in the way that they want to be treated, that they consider to be loving and caring and respectful, yadda yadda yadda. If they don’t get that, then they blame the man and they moan and bitch like men do when a woman doesn’t meet their expectations. Money is also a big issue as in both cases as it’s deemed as the source of happiness.

Today I was called away from cash to the warehouse and when I got there one woman had on a pair of men’s underwear (boxer briefs) over top of her jeans. She had something stuffed in them to suggest a penis and was making suggestive and derogatory comments to me. Another woman had a pair on her head and was wearing them like a hat. The three or four other women weren’t wearing any men’s underwear but were all were giggling and laughing and trying to get a rise out of me. They were also suggestive and poking fun at me in a suggestive and obscene manner.

I’m the only man working with fourteen women and if this were to happen to a woman in an all male workplace, there would be sexual harassment charges and heads would roll. I wasn’t offended by their actions but I was mildly shocked, no, I’d say more surprised yet at the same time fascinated by their uncharacteristic mannerisms and the things they were saying as it was something that I’ve never experienced before. This was all “back room” stuff that would never be played out in public and I doubt that it would even be privately expressed in front of their spouses or loved ones, yet here they were, singling me out and having “fun” and a “good time” expressing their sexual denials with a male stranger.

I also found it interesting

that here were the very same so-called “Christian” women,that were also giving me a hard time with not getting into the Christmas spirit and its religious implications, but were now acting the opposite of the god loving Christians they were earlier professing to be. They use their religious beliefs as a pious and righteous shield to portray the image of what they want others to think they are so that they wouldn’t see them for what they really are, liars, hypocrites and rednecks.

As I made my way back to the front of the store a couple of women that weren’t in the warehouse asked me what they wanted with me and I told them what happened. They were shocked, but I never heard any confrontation between those that took part in the hazing and those that didn’t. It all seems to have been slid under the carpet as if it never happened.

Things that make you go Hummmm!