B57 - The Croc Hunter and Survival Chakra energy

(Continued from two opposite points of view)
'06 Sept 17 7:00 a.m. I awoke, hearing the sound of a man talking. There was no one else in the room and even though I was fully awake and conscious, I continued to hear and feel what he was saying. It was loud and clear and I also recognized the voice as that of Steve Irwin, the Croc Hunter. He was talking to someone in his Auzie accent saying, "This snake isn't as much fun now as when he was younger. I had more fun taunting him back then as he would get his back up but didn't have the smarts to hurt me. He was a feisty little one then; now he's more mellow and calm, but a lot more dangerous." I could also feel his excitement of past experiences and what he was feeling now as he was handling the snake he was talking about.

I flashed back to Darryls blog and thought to myself, here's another one that gets his kicks from causing another (in this case an animal) to be in fear and having to defend itself to the point of it being an act of survival and attacking its attacker. Where is the sport and fun in that? No, I should ask, where is the love in that? I then flashed back to what I felt when I heard Steve talking a moment ago. 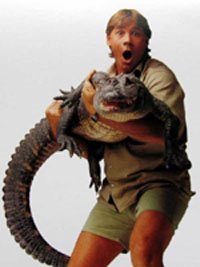 I then realiozed that that's the kind of energy that Steve Irwin was feeding off of, the thrill and excitement of the chase of an animal that had the potential to hurt and/or even kill him, but he, having the smarts to know how and when to avoid being harmed or killed when the animal attacked in self-defence. He provoked and intimidated an animal to the point that it felt it's life was being threatened. It's survival instincts kick in and it turns around and attacks, but he cleverly dodges away as he holds the animal at bay, yet not letting it get away from him. The larger or more dangerous the animal, the greater the rush he felt when it finally turned on him after he had it corned with no way to escape.

If he couldn't corner and intimidate an animal to trigger its survival energy, he would use another technique which was the use of food to bait and entice the animal, such as a croc, to come out of its natural and protective environment. Once out, he would tempt and tease the animal, presenting the food and then taking it away, to the point of making the animal desperate to get at the food. The animals desperate desire for food is also linked to its desire for life, for without food, it would die, Here again, he was triggering the animals survival instinct and by denying the animal the food, he increased the animals desire for it. It was this "desire for life" energy that Steve sought.

There was no love for animals in this man and the only affection he did show was a phoney presentation pose for pictures with baby animals or non-threatening species where he felt safe. (As I'm writing this I'm really seeing a whole another side of people, he was actually afraid and a coward) He'd pet and kiss the animal as his way of pretending to be nice and loving, but all the while he was also "feeding" off of the animals survival energy, even if the animal was a baby. How you ask? The animal didn't come to him willingly, he'd pick it up and handled it (controlling) and when it resisted....bingo...feeding time for big Steve and time to put on the act. Getting recognized and a TV show was even more food for Irwin as now he was also feeding off the people that were his "captive" audience. (And I have to say here that I WAS one of them)

He showed his true colours the time he took his baby into a croc pen and began enticing a huge croc to come out of the water to get the food he was dangling from his hand, while he was holding his child in his other arm. It's one thing to endanger your life; it's quite another to endanger someone else's, especially a child that has no choice and can't protect itself. That display of cold hearted, indifference toward his child was an example of him showing his true colours, nature and character.

During the years of his "Croc Hunter" escapades, he'd been attacked and bitten a few times by the animals he was attacking, but his having fun with the sting ray on '06 Sept 04, was to be his last display of unlovingness, as he unknowing cornered it and it unexpectingly attacked him, putting its barbed tail in Irvins heart-less-ness chest.

So now the question is, just what is he? He's not a psychopathic killer as he only "toys" and "plays" with his food and doesn't kill it. So that only leaves Luciferian energy as he derives his pleasure by controlling and manipulating animals to the point that he triggers their survival chakra energy (Will to live) which is the energy he feeds on.

So now the next question is, what's the link between Steve and Darryl? In his blog, Darryl described his taxi ride as his thrill or high of a life time. While he was feeding off the fear of others, he wasn't directly in control or driving the taxi. Steve was the opposite as he was in total control of his expereinces. Hummm. OK, back tracking a bit.

Darryl likes to watch and play sports and he also referees at games. Again, he's not directly in control, but, during these games he is feeding of the energy of those that are, those that are attacking and those that are defending, like a basketball player focused on scoring or on taking the ball away from his opponents and defending his court. Darryl's taxi ride escalated him to another level. It wasn't a basketball "game" this time, it was life and death situations including the possibility of personal injury and even death. The taxi ride experience was also a triggering, and a feeding off of the survival chakra energy but it wasn't at the same level as that of Steve Irwin, as Darryl wasn't in control of other people like Steve was of the animals.

Hummm.... denial and unlovingness to a new level. Is this the link? The escalating craving and desire to experience this survival chakra energy (will to live) to a point that one will do anything to get it, even if it means personal injury or death to others and/or ones self. Are they feeling so dead inside that they need to feel the closeness of death to feel any sensation of life? And when they do get this energy, it's more like a momentary rush, an adrenalin rush, and then they crave another fix, another high that has to be higher and better than the last one. It's like a drug. Wow!... what a sad state of being that is.