B66 - Two Opposite points of View 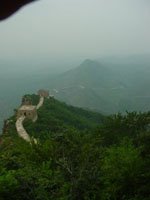 When I lived in Moncton, New Brunswick, I roomed with Darryl, a man about my age from Saskatchewan in the home of the bible thumper I've mentioned in earlier posts. He is now teaching English in Beijing, China. He has also started a blog and I was reading his newest post before I went to bed. I awoke around 3:00a.m with two separate frames of conscious experience. Not only had I felt some of his experiences in the taxi but I also experienced the feelings of those not in the taxi.. Here is the part of his blog that activated me. I'll share more after you have read this part of his blog.

************************ Darryls Blog ********************************
Came back on the subway and then caught a taxi from the station to the centre. This was the best one so far. First of all, you negotiate the price..2 shr 20 yuan....then we get in the 2nd cab but he is not hanging around. He's off like a rocket...off onto the main and does a U turn right at the first intersection....ignoring completely the cars coming directly at us and it would have been me that would have been hit....no problem and we are off...and he just goes. We have a red light and we do stop ....for about 5 seconds..and then we take off...I look back at Angela and sy wasn't that a red light...yes....oh well....and we going like hell...passing just about everything....trucks, big, small, bikes, motorbikes, weaving in and out....we come to a traffic jam...a truck to our right is holding up traffice behind him and a couple of cars have pulled up beside him..our guy pulls out in front of these three lanes of traffic...almost nails a motorcyclist...mutters something under his breath...pulls in front of the truck and just nonchalantly keeps right on going.....down a road with no lights and a jeep coming right at us in our lane ...jeep pulls over alongside the truck it was passing...we pull over a little to the right and pass each other....all going fairly fast...miss about 6 people who are crossing at the end of a bridge....5 make it one stays on the right side...cut in front of two buses as we are making a left hand turn and down the road to our complex....miss a 3 wheeled bike with no back lights or any reflective material at all..miss a few more people and stop in front of out place.....I pay him, shake his hand and say thanks for the best ride ever....it was a hoot...this is better than at the exhibition... We go into the store, buy 4 beer ...take it to the Canadian Club by our residences, go upstairs for a pee and are heading back down to the Club when the two people from the other cab are coming up the stairs.... What Kept Ya? HAHA
(NOTE: When he wrote the "Exhibition" he was referring to the midway rides at the Regina Exhibition in Saskatechewan)
*************************************************************************************

When I awoke I felt the adrenelin rush he was experiencing without a care or worry of another person being hurt or killed or even himself. To him, he was feeling excited and alive and that was all that mattered to him in that moment. I then flipped to the other people that were nearly run over and killed by the taxi driver. There was no excitement or thrill for them, in fact in most cases it was the opposite, sheer terror, anger and rage.

It made me wonder just who and what is this divorced guy with two grown children. He appears to be easy going and laid back, feels emotions, but anything other than happiness, he denies and just moves on anmyway. He admits he's an athiest and that this life is all there is. He's basically a nice guy that will go out of his way to help another but he has to keep busy or he goes nuts. Besides working, he plays sports, is an avid runner, ref's amature basketball and football games, reads business and political news, expresses strong political support for the conservative party (Stephen Harper is his Idol) likes to listen to music and dance, have a few drinks and get "cosy" with the ladies. He has money, not a lot but is confortable and is also working. He appears to have a good and happy life... but only when he's at full throttle. When he's at anything less, he appears to experience what others do when they can't do or have what they want or desire.

I also know that if he was nearly run over by a taxi full of Chinese tourists, that he would have an entirely different view of the experience, expressing his redneck opinions and judgments and what the government should do with them as they have no respect for our laws and customs and who they could hurt being as irresponsible as they are. Although he is an admitted athiest, he basically has the same denials and point of view as the redneck, bible thumping, lady landlord that we were living with. Dah! Come to think of it, that's why they got along so good... They both basically live by the same two part "Golden Rule" that states, "do unto others as you would have other do unto you"...and the second part is "do as I say, don't do as I do".

So now.... where is this all leading me? You'll be as surprised as I was at what I was experiencing the next time I woke up. See blog post...The Croc Hunter and Survival Chakra energy