B93 - (Message from Hathor) and Two Dreams 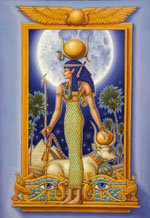 This is Hathor, the preserve of Life. That which I seek, I seek not to kill but to protect. It is the essence of Life I seek for it is that which endures. Although the Body and Mind may be subdued and destroyed, that which remains is eternal. But though I say it is eternal, for if it truly was, there would be no need for protection. But alas, it too suffers as does the Mind and Body but it is that which provides for the Mind and Body its essence so that Life may flourish.

It is since the beginning of time that there has been this struggle by those that seek to control all that is created, to find that which is this eternal flame that refuses to be extinguished no matter how relentlessly it is hunted down and brought to the edge of extension, lo, even then, it still flickers to re-ignite and continue life anew. It is like a flame, a light that no matter how the wind may try to extinguish it, it re-ignites when even all trace of glow or ember has died and blackened. This eternal flame is that which I seek, not to destroy, but to protect.

I knew that hathor was Egyptian, so I did a brief net search and found that Hathor was the daughter of the sun god Ra, and was the goddess of the sky and of love, festivity, and beauty. As a goddess fertility as well, she embodied nature. There many pictures that show Hathor with the head of a cow. Her son was Horus, but she gave him up to Isis. She later married Horus. I felt that she was protecting the Earth and when I found this picture on the net, it symbolized what I felt

6: 44 a.m. I saw a dark shadowy figure lurking as if it were waiting for something or someone. It had two arms, two legs and a head, but no real physically defined form or features and it stood about ten feet high. I felt that it was the predator that stalks the female, (this eternal light that Hathor was talking about) that has the DNA that is the true source and not of it. That which is of it, still needs that from which it came in order to exist, while that which is it, is the eternal flame…

7:00 a.m. I saw a woman tied hand and foot, standing spread eagle, tied to two pillars, like in the King Kong movie. This Ape like creature that I described before was behind her waiting for her to die in order to capture her essence of which 80% had been destroyed or already removed.